We are all broken.

From the moment we're born, we begin to break. It's as immediate as oxygen hitting the lungs. As my mother, or any other pessimist might say, "it's all downhill from there."

That's a horrible way to look at it, huh? And I promise I am not that pessimistic, even though there are times. A reluctant optimist, maybe, because no matter what happens to me I always maintain a sliver of hope. Or even a pessimistic optimist as my dear friend describes it. That might best describe me and is a great oxymoron for you on this Sunday morning.

I've been doing a lot of yoga, as well as trying on the practice of mindfulness. I won't share too much because I feel it is very private and very much my own, but as I was reflecting on my day the other night before bed in meditation, something really stuck out as hurtful. As the guide asked me to "Let it go... let it go..." I absolutely could not! It wasn't going anywhere. So, I'm writing this post as an effort to "let it go." As someone who is racking up a lot of life experience nowadays, I've officially decided I hate the phrase, "I can't imagine what you're going through!"

It's a throw away line. A filler for when you don't know what to say. I know I've even used it before to others. It seems genuine, but it's rather useless. Oddly enough, my response in real time was to nervously bust out laughing and say, "Well...uh...we do the best we can." And then I change the subject, "You're hair looks so nice!" Ha! 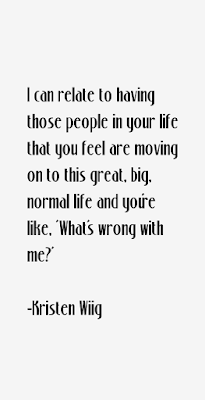 I feel you Kristen...


Here's my real response: Don't! Don't try to imagine it. Why would you do that? I can't imagine what it's like to be you, and even if I do try, it's useless. I'm never going to be you! Maybe I want to... maybe you have a healthy husband. Maybe you have beautiful kids. Maybe you seem to have life all figured out. You probably don't, because we're all trying to figure out this bewildering beast, but maybe the facade of your life looks really nice. I'd love to try it on. Maybe even have it for my own, but now matter how I twist it, your life is not mine. And mine is not yours. Cancer is not mine. It's not ours. Jon and I don't have it patented. Illness and misfortune could happen to anyone, anywhere, anytime. Be thankful for what you do have today, what is yours, and know that all things are transient. As I mentioned in an earlier blog, I'm striving to accept this.

So that phrase, "I can't imagine what you're going through," can really set me back. It's hard to let go of and it makes me feel like a leper. Leper - a person who is avoided or rejected by others for moral or social reasons. For the many people who have said this to me, or someone else who is "visibly broken," or even to myself who has said it in the past to others, let's scrap this phrase from our vocabulary.

Joseph Campbell once said, "Enjoy the tragedy of your life." I love this. I love this so much. I break it down like this in my own words, "Fuck this shit, I'm going to enjoy the ride anyway!"

A trip to the ER last week revealed Jon has a hernia and will likely need surgery coming up. We follow up next week. As far as I know, it's unrelated to the cancer. Just a little side attraction we get to deal with. Good news is that it doesn't hurt him. All in all, he's feeling better and I'm hoping that's the chemo working on shrinking the tumors. Despite our "unimaginable life," we've been having a ton of fun lately. Planning for a beach trip, playing rummy (one of the best summer past-times ever), and as always watching movies. I even have a new job in Serenbe as a shopgirl - a position I've found I can can slip into easily. And we've started chatting again about film projects and screenplays. The important thing: we're laughing again, and that is, after all, the best medicine.

Have a beautiful Sunday,
Robyn
Posted by Robyn Hicks at 7:14 AM